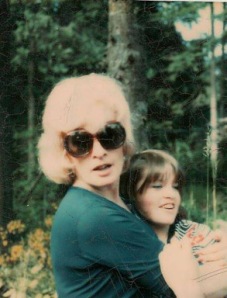 Life with Shirley was always an adventure. She had a movie star quality, although sometimes it was difficult to tell whether she was channeling Lucille Ball or Marilyn Munroe as she could so easily be either. Nothing about Shirley was ever ordinary or uneventful. Circumstances just seemed to happen around her.

Today, there are many frequently-told stories about her flooding out the apartment building by leaving taps on during a water shutdown, or getting latex paint paw prints over the new Berber carpeting or driving down “ferry hill” on Gabriola Island and losing the brakes on the car.  (It was at that point – at the age of six – I announced my decision to simply walk from then on.)  She inspired some, infuriated others, challenged many and defied everyone’s expectations… and through it all, she was always Shirley.  When I’ve had my own inexplicable “Shirley” moments, I’ve had to wonder whether I’m channeling her myself or whether I am simply living up to being her daughter.

Sadly, though, we did not realize that C.O.P.D. had likely already started its heavy toll on her energy and her ability to focus long before we even knew what those letters stood for – chronic obstructive pulmonary disease. She had worked hard to build a late career and re-gain a financial footing but she seemed fatigued. It was nothing that we did not put down to other than hard work, stress and perhaps dealing with the fact that life had not quite turned out as she had hoped.  What it meant, though, was that COPD had become part of her everyday life and we were all about to learn the significance.

The best defence against COPD

I do not want to discourage anyone who has been diagnosed with COPD (or their families) as there continue to be advances and much can be done now to “live with” the disease. At the same time, it can be a harsh journey. I am hoping in building awareness and raising funds that it is a path fewer people have to face. Ensuring good health – despite the diagnosis – is the best defence in fighting the progression of COPD.  A COPD patient’s body is already taxed in trying to meet its oxygen requirements.

While we all typically make the standard New Year’s Resolution each year to exercise more, eat better and take better care of ourselves, this is particularly important for a COPD patient. The more efficiently the body can operate under the strain of COPD, the better able the individual can cope overall. Maintaining a strong immune system is also important in guarding against the common cold, virus or flu bug that can, in the early stages of COPD, zap much-needed energy and in later stages, lead to recurrent hospitalizations. A minor cold could put someone with lung disease into a critical and even life-threatening situation very quickly.

As Shirley found, regular exercise was beneficial but difficult to maintain as the fatigue from the constant struggle to breathe could seemingly make the trip to the gym more exhausting than the anticipated benefits from the exercise itself.  It can become a downward cycle as a COPD patient curtails activities to preserve energy and is then unable to maintain a certain level of fitness to battle the disease.  Shirley climbed a mountain every day in her struggle to simply stay active and to breathe.  When I train now for the Kili Climb for Life, she is often in my thoughts. On those occasions when I tell myself I am simply too tired to give it everything today, I ask myself how Shirley would be approaching the day… and then I give it my ALL in the same spirit and courage she always did.

Here’s to Mom and her indomitable spirit.

2 responses to “Living with COPD”